‘Would you tell me, please, which way I ought to go from here?‘

‘That depends a good deal on where you want to get to,‘ said the Cat

Why bother with multichannel sound?

In the beginning (of sound recording) there was mono. One channel of recorded information played back through a single loudspeaker. And for a long time this was accepted as sufficient. In fact it was 25 years after early exploration of multichannel reproduction techniques that stereo was finally introduced to the music listening public in the late 50s. The reaction of many then was similar to the reaction of many now when talking about surround: why buy more speakers when we are quite happy with what we have already?

The answer to this is the compelling benefits that extra channels of recorded information bring to the experience. Many of us want a quality experience when listening to recorded music: we want the music to thrill and move us the way it was designed to, and the way it does when performed live. To do this, recordings have to deliver both sound quality and spatial information, and the best way to convey spatial information is through multiple channels.

Although it took a while to catch on, now that everyone is used to the extra spatial imaging that stereo provides there is little if any interest in mono as an acceptable way of listening to music. Stereo allows sound sources to be positioned on the ‘stage’ between the speakers, and can give a reasonable sense of the space that the music is set it in, but it can’t recreate it.

Even at the time of its introduction, it was realised that more than 2 channels of sound conveying greater directional information would do a more convincing job of recreating the illusion of the original performance. Stereo was simply considered the most acceptable compromise at the time, relatively inexpensive and good enough for the home. However, the technological and economical constraints of 1960 no longer apply today.

At best, listening to stereo is like looking through a window into a room in which music is being played: surround puts us in the room with the music.

Another benefit of surround compared to stereo that is not often realised, is the improvement it affords musical dynamics. With any system the listener sets a general volume level that suits them, but as a surround system has at least 3 times the ‘fire power’ of a conventional stereo system, this leaves much more clean amplification power in reserve for dynamics. The practical effect of this reserve is that musical swells and loud passages can be delivered more faithfully and without distortion in a way that much more closely resembles the original event.

This in itself adds drama and excitement to the experience.

How many channels is enough?

This is a good question.

The convention adopted was 5.1 (ITU-R BS.755.2) which comprised 5 full range channels – 3 across the front (Left, Centre, Right) and 2 surround channels placed to the sides and slightly behind the viewer – plus a channel dedicated to bass (for low frequency effects), which was dubbed 0.1 due to its limited bandwidth. 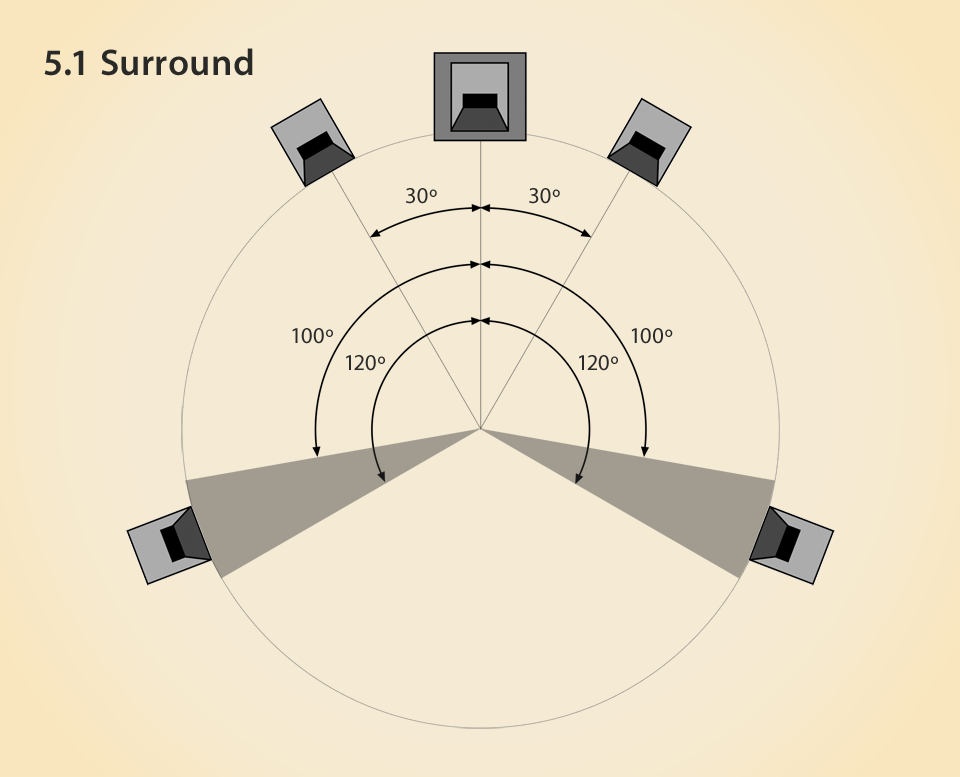 The 3 front channels replicate those conventionally used for film, where the all important centre channel anchors dialogue to the screen.

For music the addition of a centre channel to replace the phantom centre image brings solidity to the imaging of the forward sound stage and broadens the ideal listening sweet spot, because the centre sources are fixed at a point in the room and do not shift when we move our heads, as phantom images do. Our ability to localise the placement of sound sources in front of us is much more precise than it is to the sides, so having an additional front channel to help with that is useful.

While sounds arriving from the sides are harder for us to localise, they are very effective at producing a sense of envelopment, and so the 5.1 convention specifies that the 2 surround speakers should be placed at 100º to 120º in relation to the central axis for this reason, as well as to cater for any rear oriented direct sound sources.

Although not the only surround convention, 5.1 is considered very effective at providing an immersive listening experience, even when compared to arrays containing more speakers, and as the current basic standard for surround film and music delivery, is therefore the most prevalent of the large and growing base of installed home theatre systems. A bigger array does give greater ability to localise direct sources, however.

…and we are trying to build a convincing replication of the aural world, so how far is enough?

Adding extra pairs of side speakers helps localise direct sounds from the sides, which in a 5.1 array tend to snap to either the front or surround speaker of each pair, and allows the rear most speakers to be moved further behind the listener to further enhance envelopment. They also, as the centre channel does for the front sound stage, fix the direction of sound sources in the room and so broaden the listening sweet spot further. 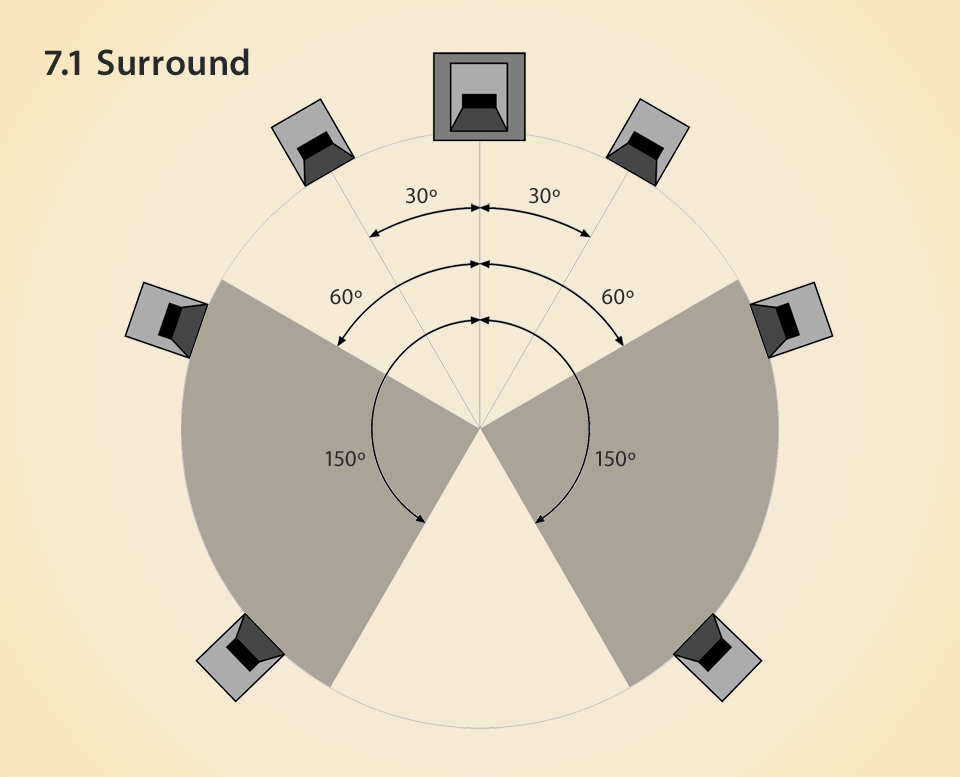 This discussion about surround speaker placement so far, has assumed that all full range speakers are arranged on a plane at ear height or slightly above it angled down appropriately. (There is greater freedom with placement of the LFE or 0.1 speaker, as bass frequencies are not perceived as directional). However we are now starting to see the unveiling of surround speaker arrays with height as well as horizontal information, and once again these developments are being driven by interest from the film industry.

Of these, Auro 3D is possibly the most interesting for music, and adds a regular 4 speaker array elevated at 30º to deliver height information. The discrete sound information for these extra channels is embedded into the regular surround channels during production and can be extracted on playback with an appropriate processor.

The major attraction of a height layer is that it adds a tangible sense of size to a recorded ensemble, which can be quite dramatic when applied to a symphony orchestra!

For this section in particular, Mir is indebted to Floyde E. Toole for information contained in his book Sound Reproduction: loudspeakers and rooms  Focal Press  2013. This contains much useful information for anyone interested in further reading.