opening up to High Resolution Audio

What is High Resolution audio?

Resolution is a term used loosely to describe the amount of information and detail captured in a digital audio file, expressed as a combination of sample rate and bit depth.

Sample rate describes the number of audio samples taken every second, and determines the frequency response possible. The Nyquist criterion tells us that to overcome distortion known as aliasing errors in the digital conversion process, sample rates of at least twice the required frequency bandwidth need to be used.

Bit depth (which is technically what resolution refers to) determines the possible dynamic range. Theoretically each bit allows 6dB of dynamic resolution, so 16bit allows a dynamic range of 96dB and 24bit allows 144dB. As with many things however, the theoretical and the actual can be very different, unfortunately.

The present standard for digital audio is taken to be the CD, which has a sample rate of 44.1kHz and a resolution of 16bits. Anything higher than that is generally referred to as high resolution audio.

So, you may ask, if the CD can deliver at least 20kHz bandwidth and over 90dB of dynamic range

Why bother with High Resolution?

From a theoretical or scientific point of view, I have to admit that I have no convincing answer, although the ability of the human brain to detect inter-aural time differences as short as 10 μ sec* (and some would argue 5 μ sec) to build a model of the sonic world around us – an ability humans have depended upon over the ages for survival –  may hold some of the answers. 5 μ sec  equates to 1/200,000 of a second or 200k as a sample rate. Taking note of the Nyquist criterion, this means that for a digital recording to render this timing detail undistorted, the sample rate would need to be 400k. And so this is the sample rate that may be required for our digital recordings to approach being indistinguishable to us from the analogue waveform of the original performance.

Illustrated below is how digital recording deals with a 3 μ sec impulse. Not shown here is DXD, which has a sample rate of 352.8kHz and so rivals DSD, and is also getting pretty close to the 400k mentioned above. 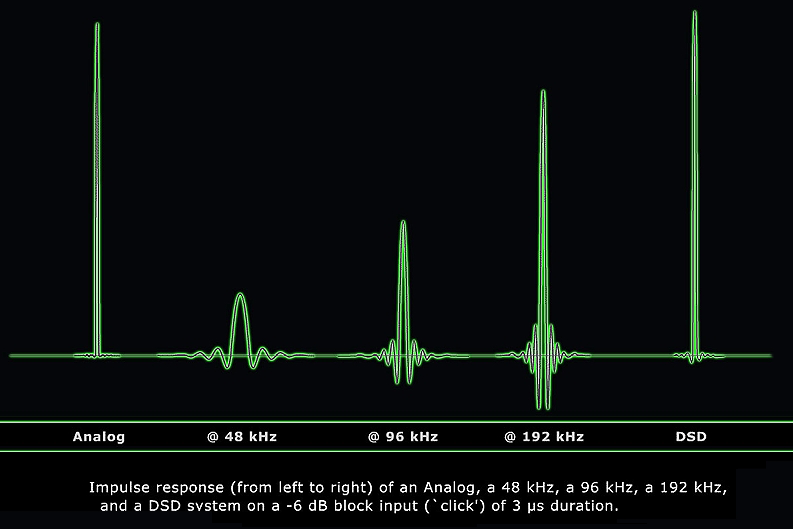 As much as we may seek a scientific understanding of all that is at play, it is easy to become distracted with the theoretical and forget what we are trying to do, which is record and deliver music as faithfully and compellingly as possible.

All I can tell you is that from my own repeatable experience as a recording and mixing engineer, it makes a big enough difference for me not to want to work at anything less than I have to. That difference manifests itself as finer spatial detail, greater sense of depth, and more faithful instrumental timbre. High frequency content is silkier and bass is tighter and better defined, and overall I don’t have to work so hard to separate instruments in a mix: they are somehow just more clearly defined to begin with.

However, I can understand why many have been slow to realise the difference, because a quick A/B comparison between the two does not reveal a dramatic change…..at first.

In my own case I had little interest in high sample rate until a few years ago, and it was only when asked to be involved with Ben Gurton’s recording of ‘Prelude to a Scene’ (also released by Mir Creation), which he wanted to record at DXD (352.8kHz, 32bit) that I realised what I had been missing.

Before mixing, I set up my second Pyramix system with a 44.1kHz session, feeding it an analogue mix from my main DXD system, and taking an AES output from it, level matched, back to my monitor controller. Admittedly this introduced an extra stage of A/D and D/A conversion as the DXD analogue feed passed through the 44.1kHz system and back, but I trusted the quality of my premium converters to make minimal difference.

I thought little about the alternative system until a pause half a day into mixing gave me the chance to check it, and I was astounded by the difference. It was like throwing a switch between 2 very different pictures. When switching to the 44.1kHz version, the wide and spacious soundstage we had been enjoying snapped to a much smaller frame, and the depth collapsed and flattened! Everything sounded rather degraded and less musical, and all we wanted was to switch back to what we had been listening to before.

It seemed like the brain had been recalibrating itself while listening to the higher resolution DXD recording to a degree that it could immediately tell when that resolution was diminished to single sample rate.

As I mentioned above, this ‘tuning in’ has been a repeatable experience, most recently when mastering the CD version of ‘Sanctuary’. The project was recorded at 192kHz (the track count and production approach making DXD a bridge too far in 2014), and was only reduced to 44.1kHz, 16bit for CD when the Red Book master was generated.

I listened back to the CD version to check it, but with increasing anxiety until by track 3 I was convinced there was something very wrong. Once again, much of the spatial depth and detail I had become used to was stripped away and everything seemed lumpier, almost to the extent that the balances seemed to have shifted.

I had been sitting in the back of the control room while Paul Bryant engineered the mastering session, and concluded I had not been paying enough attention, but further comparative checks revealed that everything upstream of the final output for CD was perfectly fine. The down sampling and reduction of resolution for CD was the stage at which the losses in audio quality had occurred.

So for me, the fact I can hear the difference and my recordings sound better is enough: I don’t have to talk about it when I work. Interestingly though, musicians repeatedly pick up on it and invariably ask questions along the lines of ‘(pause)…this sounds really good….what are we listening to?’, and as much as I would like it to be so, I’m pretty sure its not because I became a better engineer overnight.

As a listener you don’t need to worry about any of this. The benefit is that high resolution recordings, done well, can deliver a much more musical and emotionally engaging listening experience than lower resolution versions.

Mir Creation has embraced high resolution recording and production purely for the purpose of delivering the best listening experience that we can, and offering our recordings in a variety of sample rates and formats so that listeners can choose what suits them best.

a personal perspective by Ross A’hern (2015)

Why bother with surround?

* “The ability of inferior colliculus to signal differences in interaural delay” Benrt C Skottun et al, Proceedings of the National academy of Sciences of the United States of America April 2001