The Song Company – In illo tempore 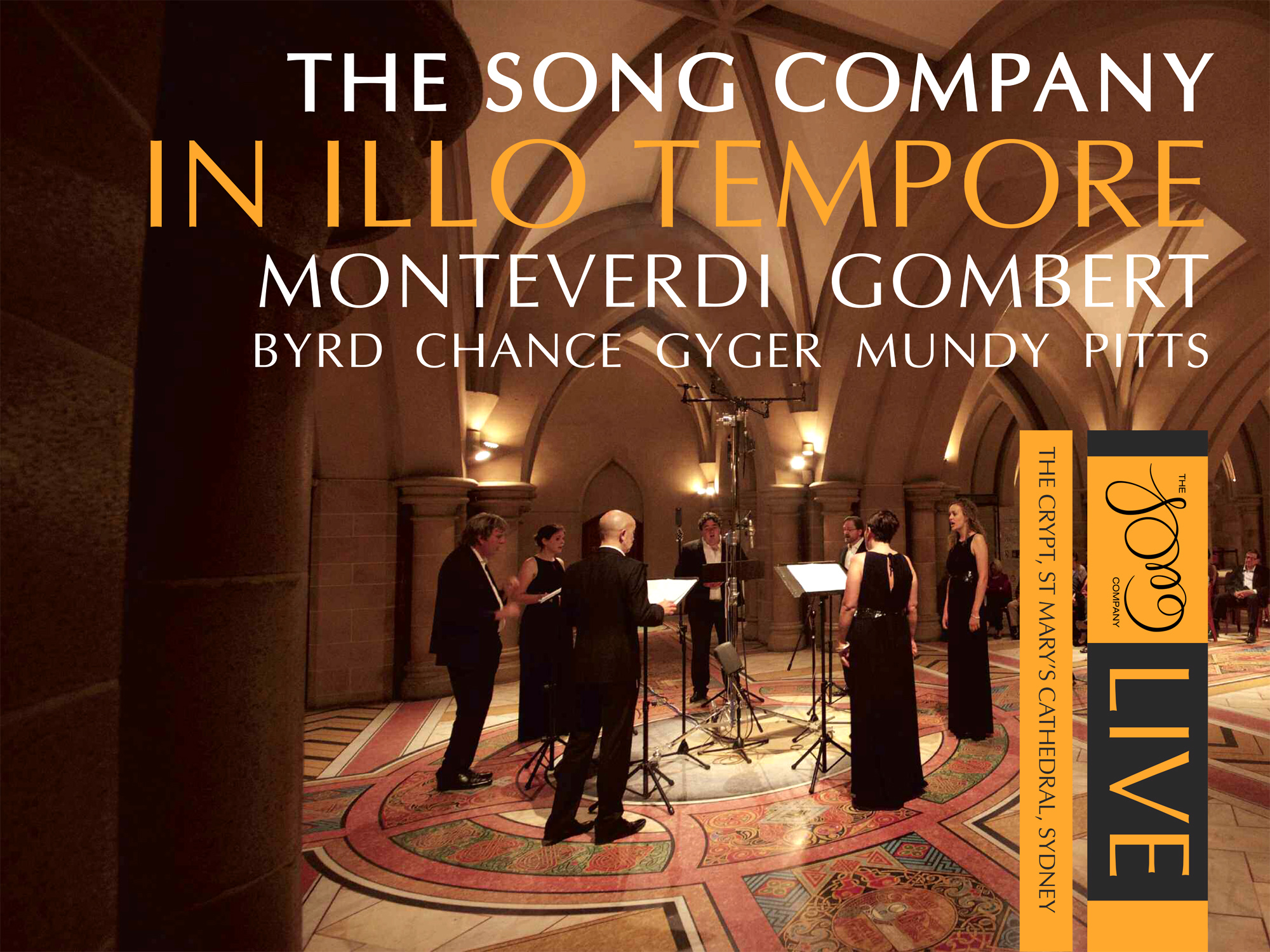 This album was recorded live by Bob Scott and Ross A’Hern in the beautiful, acoustically vibrant Crypt of St.Mary’s Cathedral, Sydney during two concerts and a rehearsal in April 2016 to Pyramix at 192kHz for stereo and 5.0 surround release. The surround mixes are offered here in 192kHz/24bit.flac as well as 96kHz/24bit.flac, as a way of delivering this full resolution. Both versions plus booklet are offered as a download bundle.

This new album captures a moment in time in The Song Company’s long history and my first season as the new Artistic Director of Australia’s premier vocal ensemble. As well as adding to our legacy of recordings of music from many times and places, In illo tempore is also the first chapter in a new series of releases showcasing the sounds and stories from our live performances. Here the evocative acoustics of the Crypt underneath St Mary’s Cathedral in Sydney perfectly reflect the polyphonic glories of Monteverdi’s Missa In illo tempore which gives the album its name.

We’ve made a virtue of the contrasts and comparisons between the rich harmonies and intricate counterpoint of music by Monteverdi’s forebears and contemporaries, Gombert, Mundy and Byrd, and from our own time, by Australian composers Alice Chance and Elliott Gyger, so we hear the parts adding up to a brand new whole. There’s one piece of mine on the album which brings together the idea of different temporal dimensions and celebrates the emotive power of music to transport us through time and space. 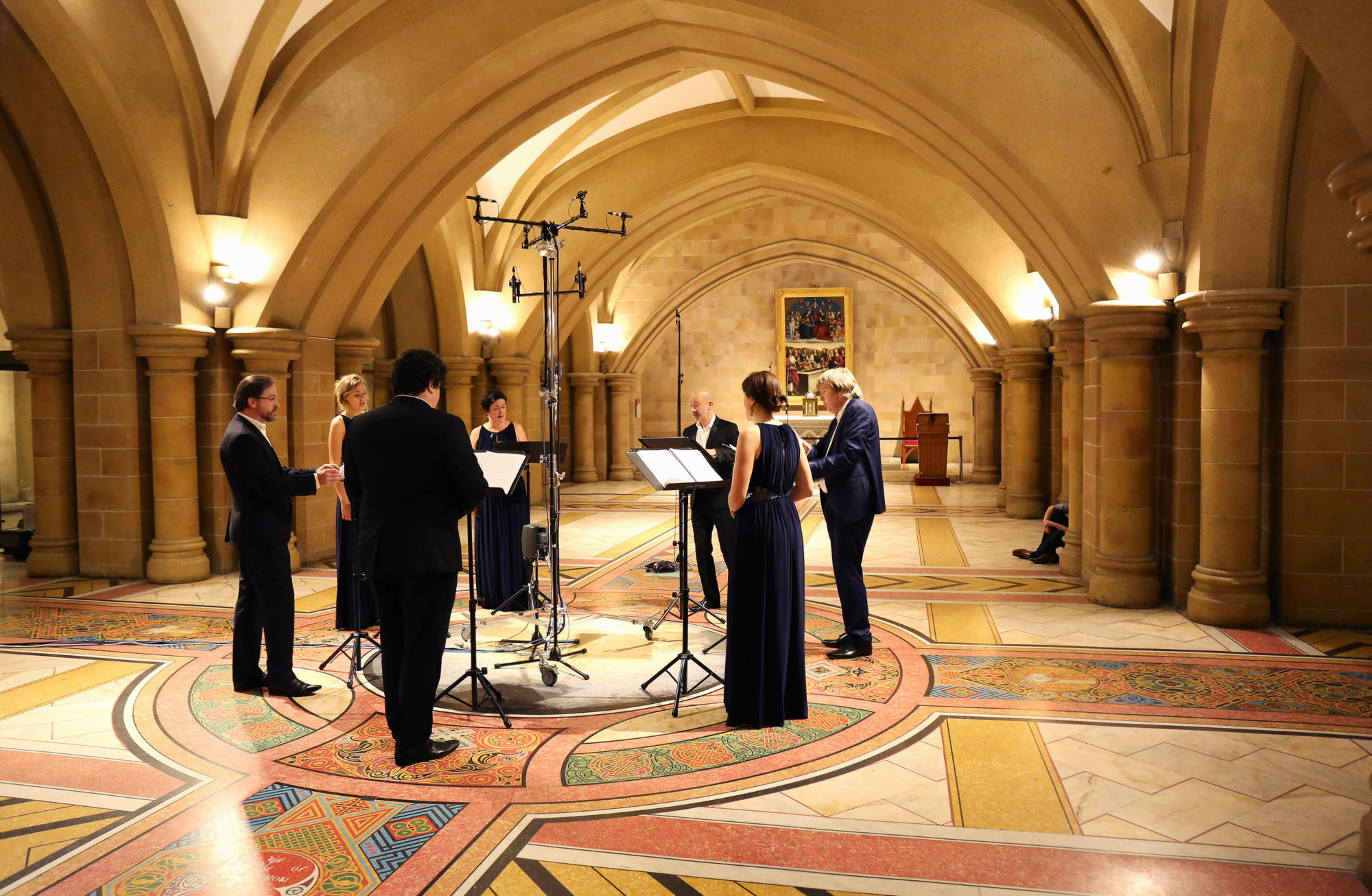 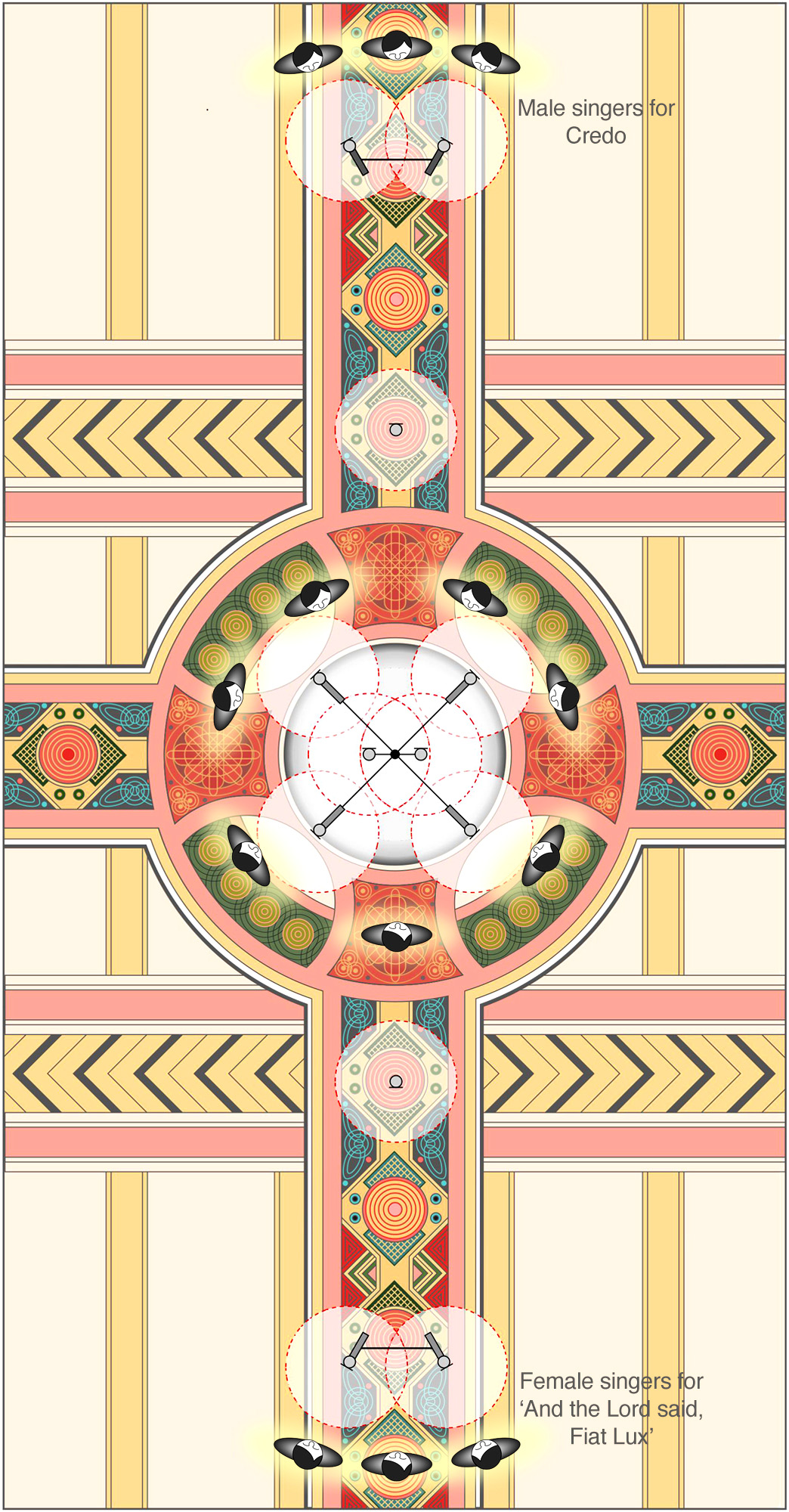 The Crypt beneath St Mary’s Cathedral in Sydney is a colourful and impressive space, both visually and acoustically, with rich reverberation designed to enhance sacred singing.

This recording was scheduled to document live performances of the program, but the accommodation of an audience within this relatively intimate chapel for the first of three concerts dried up much of the open and vibrant sound we had been enjoying during the sound check, so a number of extra mics were added for subsequent performances to restore the sonic character we were seeking.

For the most part, the performance placed the singers in various positions around a circle in the centre of the space, so this is where we placed our main mic array. The exceptions to this configuration were the anonymous Credo, in which the male singers moved to the north end of the Crypt, and Alice Chance’s And the Lord said, Fiat Lux, sung by the female singers at the south end, so two pairs of mics were set to capture these pieces in the traditional way. Having most of the program performed by singers in a circle around our main mics presented an ideal and obvious opportunity to make an immersive, surround recording in addition to the stereo mix, rather than being confined to the usual ‘stage’ at one end of the venue. This recording combines this advantage with high resolution capture to give an album rich in sonic detail, and one in which the voices combine and interact musically with the acoustic space, yet also retain individual clarity. This aspect is evident in the stereo mix, but is still more pronounced in the surround version, as a carefully made immersive recording will always deliver more convincing and vibrant spatial rendering than standard stereo.

‘A time. A place. Another world…Standing in a circle, facing inwards, the group’s six choristers explore Easter via Monteverdi’s Missa in illo tempore, interlaced with other vocal meditations, old and new, on the liturgy. Thus the eerie directness of William Byrd (1540-1623) makes way for a rich tangle of notes, hanging on in the air like ghosts, from Elliott Gyger (1968-) [and Alice Chance], and harmonious chords veer off into chromaticism in Monteverdi and Pitts. It is intoxicating stuff: in the Cathedral’s stone crypt voices ring on long after the singers have finished, lending layers of organic polyphony to the artifice of the composer. Music director Antony Pitts and his ensemble sculpt the moving air with superb finesse, and sound engineers Bob Scott and Ross A’Hern shepherd it into an immersive, uncannily clear surround sound… Just put on your headphones, close your eyes, and imagine yourself tumbling through time and space’.

‘Standing in a circle on the terrazzo floor under the central vault, the building amplified and echoed the interweaving lines with iridescent resonance, building to a peak of intensity in the elaborate counterpoint that closes the Gloria and Credo of the mass that was quite magical… Pitt’s music expanded classic polyphonic vocal textures to incorporate modern harmonies within a broadly consonant framework and in an original and sensitive understanding of the voice… This was a concert of rare and transcendent beauty’.

‘A three-part polyphonic soothing of the soul… The concert was divided into three parts, representing three aspects of Easter: Tomb, Hades and Throne… Each section also worked in Thou wast present as on this day from Pitts’ Requiem for the Time of the End. The unifying element was the fluidity of time, the connection between past, present and future and, of course, the musical thread of polyphony that can arouse a sense of the eternal in the hands of a dextrous composer. The singing throughout was precise and unforced, the vocalists taking advantage of the Crypt’s natural amplification. Pitts’ direction from within a circular arrangement ensured a tight relationship between vocalists, as well as a democracy of the six singers’. (Andrew Luboski) Limelight

‘From the first intake of breath… I was yet again overawed by the exquisite vocal machine that is The Song Company… exploring the Easter story with music old and new, the audience were enchanted and seduced by the possibilities of the voice – at once reverent, distant, sombre, joyful and spiritual… Artistic Director Antony Pitts created a concert in three parts exploring the subjects of Tomb, Hades and Throne. Into this musical setting was interwoven some of the most beautiful, intricate and intimate hymns, psalms, a capella Mass parts, plainchants and motets… The ‘filigree detail of each individual vocal part’ was brought alive by Susannah Lawergren, Anna Fraser, Hannah Fraser, Richard Black, Mark Donnelly and Andrew O’Connor’. (Lliane Clarke) Classikon

The release of this album is spread between a number of labels, with CDs handled by the Song Company direct, high resolution stereo versions distributed by Hyperion Records and 5.0 surround versions supplied by Mir Creation here.

Multichannel 5.0: our shop below allows download of both 96k/24bit FLAC and 192k/24bit FLAC versions